Nigeria World Cup kit sells out in minutes as fakes 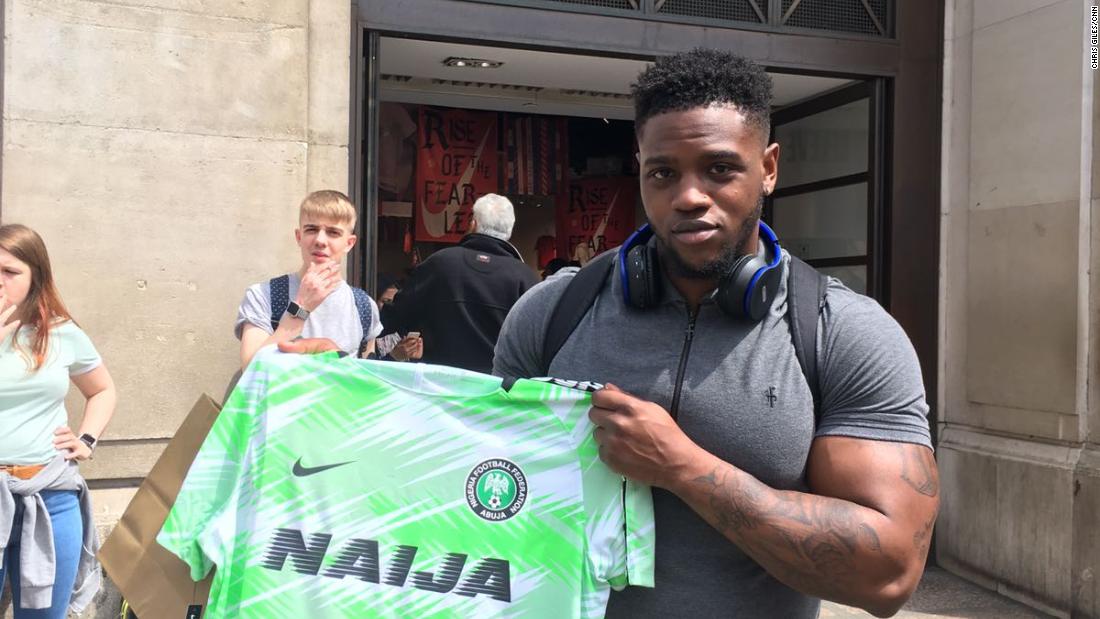 Some of the fans queued outside Nike’s flagship store for several hours in the morning to get into the store.

Since Nike unveiled its streetwise design for the Nigeria’s World Cup team kit three months ago, there has been a frenzy online from people eager to splash out $90 for a shirt.

CNN spoke to Nigeria fans waiting to buy the jersey outside the store. They said they would be rooting passionately for the team, and a few were keen to buy the kit ahead of Nigeria’s pre-tournament friendly with England on Saturday.

While another said it was “the nicest World Cup kit, this is the best, of this World Cup, they are the nicest. People of other cultures are trying to copy ours so… we are so fly, you can’t blame us.”

Nike UK said in a tweet that it currently had no plans to restock the merchandise, prompting angry responses online from fans already frustrated from having to wait weeks for the kit’s release.

CNN was not immediately able to reach Nike for comment.

The decision is sure to fuel the market for counterfeit jerseys. Fake versions of the Nigeria kit have been openly on sale in Nigeria for at least a month. 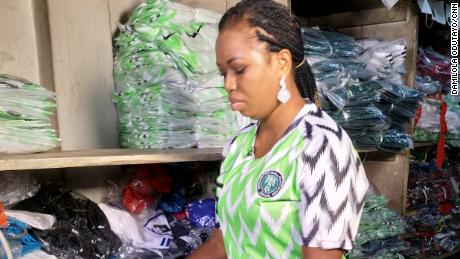 A counterfeit kit seller sorts her wares in her shop in Lagos on May 31 2018 ahead of the official release of the Nigeria World Cup kit.

The replica jerseys are made in Thailand, one of the sellers told us and were selling for between $20 to $40 depending on the quality, while more lower grades can go for around $5.

Seller Ronke Oni told CNN the anticipation for kits before they were released on Friday fueled demand for the replicas.

“Most Nigerians, I don’t think can afford the original,” she said. “The replica is the same as the original, except you look closely at it.”

Some analysts think that Nike waited too long to make the kits available and created space for bootleggers like Oni to cash in on demand.

Sport journalist Godwin Dudu-Orumen, who runs a sports academy in Lagos, said: “The kits are not readily available. If I want to buy one and I can’t find it, more than likely the man on the street will go for the one that’s fake. They need to ensure that the kit arrives in good time, don’t wait until expectations are climbing.”

“Four to six weeks ago, someone asked me but I didn’t know where to get one and now fake kits are being sold on the streets. You can dilute that demand by making the kit available in good time.”

Kits deals can be highly lucrative to football federations.

The Nigeria Football Football Federation (NFF) entered into a three-and-half-year partnership with Nike to make the country’s kits in 2015. The deal was worth $3.75m and a $500,000 bonus if the “Super Eagles” qualified for the 2018 World Cup in Russia, according to Goal.com.

The NFF previously had a deal with German sportswear brand Adidas, joining countries such as Australia, Brazil, England, France, the Netherlands, Portugal, South Africa, the US and South Korea. 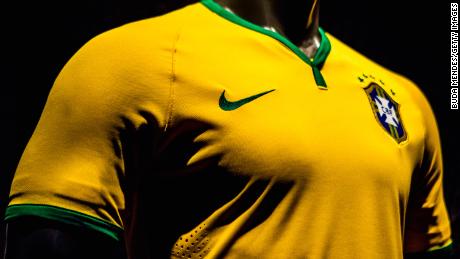 World Cup 2018: The history of football kits and why we care about them

Recently the NFF complained about how counterfeiters can potentially ruin such lucrative deals.

“The people who will criticise the NFF for not getting a so-called big sponsorship kit deal are the same ones who will undermine our ability to do so by buying the counterfeit jerseys,” NFF head Shehu Dikko said in an interview with ESPN.

Most of the sellers that CNN spoke to in Lagos didn’t seem to understand why it was wrong to sell fake goods.

Oni acknowledged, when pressed, that what she was doing was illegal, however, for her and other sellers, it all boils down to affordability.

Nearly half of Nigeria’s 196 million population live in poverty, according to the World Poverty Clock agency.

The minimum wage in Nigeria is around $50 per month and very few have a disposable income to splash on luxuries such as football kits, even in a country as football mad as Nigeria.

Analyst Dudu-Orumen says it is inevitable that people here will always be attracted to the cheaper alternative, even when it is fake.