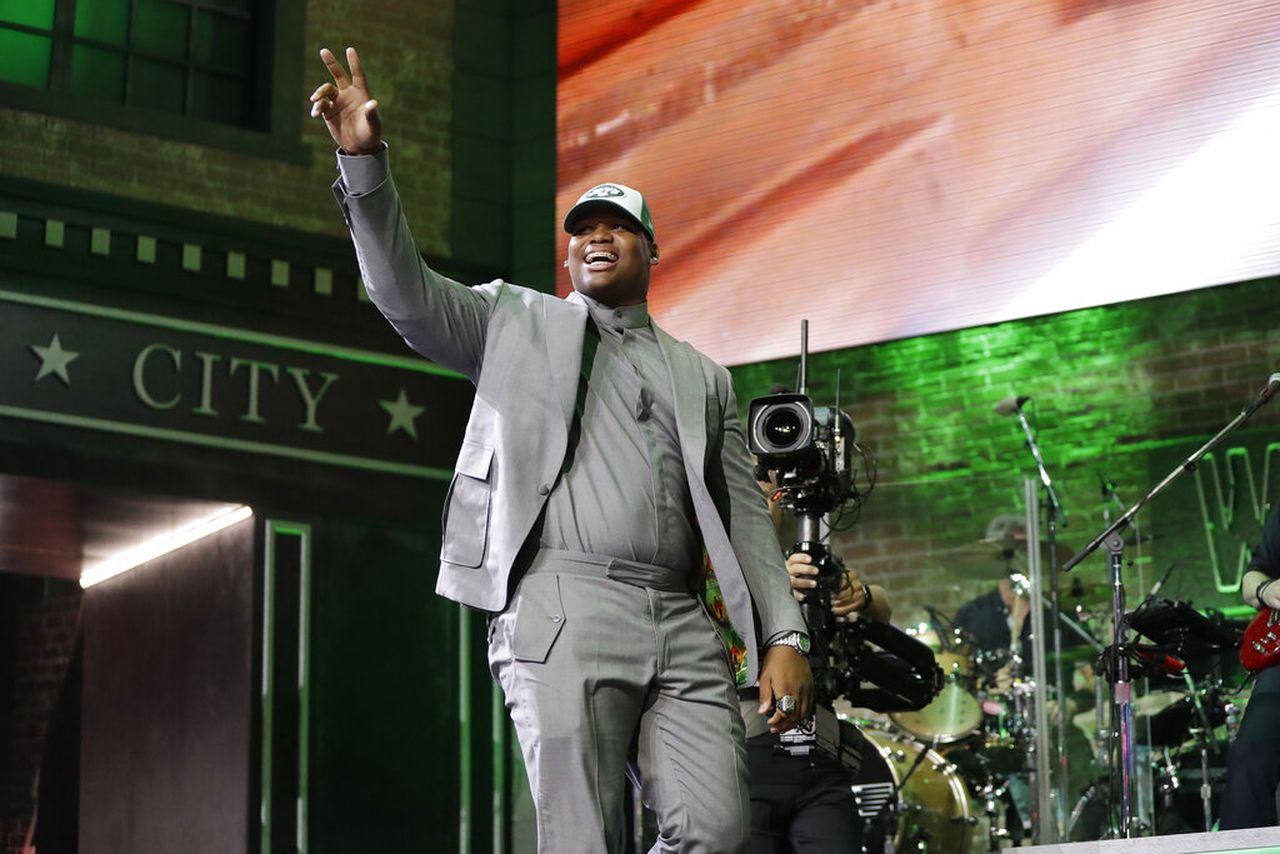 When the original plan to hold the draft amidst the glitz and glamour of Las Vegas had to be altered because of the coronavirus, the NFL also altered its dress guidelines for the draft prospects. Rather than custom-made power suits that scream “I made it,” this year’s NFL Draft fashion will take on more of an at-home, “this is where I started” vibe. This year, players can grab whatever outfits out of their closets they feel most comfortable in.

While some of the less fashion-minded players might welcome the reprieve from fittings and fabric selection sessions, the majority seem to be “bummed,” David August Hiel, the founder, creative director and CEO of David August said. His company has dressed draft prospects for every major sports league as well as creating Conor McGregor’s “F— You” suit he wore for his fight against Floyd Mayweather.

This year, David August has significantly less orders for suits than it normally does—in fact, almost every player Hiel has talked to is going casual for the draft and the majority of Auburn and Alabama players have no special plans. Hiel said that seems to be the case across the industry, and TMZ reported that custom suit designers are seeing a serious drop in orders. But Hiel gets the sense it’s less about wanting to be comfortable in a t-shirt and more about the lack of time to create a suit.

“I think that all these guys have been looking forward to this day for their entire lives,” Hiel said. “It’s something where they can really show their personal style, and they get very excited about dressing … Even if they’re not a fashion guy, they know that this is the time to strut your stuff and stand out.”

Hiel and his tailors prefer to have several months to design a player’s suit. They like to get to know his personality, interests and style. Then, they start designing. The process is very in-depth, but in simplified terms, they take measurements, make decisions about the design, create it, do a fitting and then adjust as needed. On the day of the draft, they help dress the player, from helping him tie his tie to going over the do’s and don’ts that will help the player display his outfit in the best manner. With the coronavirus shutting things down for over a month, players would have had to plan way in advance to have their suits ready in time.

It’s still possible to design a suit while practicing social distancing, but it’s a lot harder. Hiel said his company is very experienced with FaceTime consulting sessions because of its global clientele, but it took a lot of practice. Notre Dame’s Julian Okwara is one player who’s still dressing up, and David August started designing his suit months ago. They had to finish the process with lots of FaceTimes and overnight shipping exchanges. When they sent him his suit, they pre-tied the tie, and they’ll FaceTime again as he gets dressed.

Players don’t necessarily need a custom-made suit, but it’s generally hard for athletes to get suits off the rack. Typically, they have big chests, small waists, big seats and big thighs, although that varies depending on the sport and the position.

“So now what’s happened is most of these guys have resigned themselves to dressing very casually and making it more of an at-home-with-the-family draft year,” Hiel said.

It’s become so casual that some players hadn’t even thought about their outfits with just a few days to go. Alabama’s Raekwon Davis said he was just planning to wear “regular clothes” and Shyheim Carter wasn’t sure what he was going to wear. Auburn’s Noah Igbinoghene, a possible first-rounder, hadn’t put together his outfit either.

While Alabama wide receiver Henry Ruggs III said he had his outfit planned, it definitely isn’t something you would have seen in Las Vegas — he plans to wear an Old Spice robe.

Auburn offensive lineman Prince Tega Wanogho is among the few who will be outfitted in high fashion. Going into the event, Wanogho will have the spotlight on him with ESPN airing his story, and he was able to make sure he’d be dressed for the occasion.

As he sits in Montgomery with his surrogate family waiting for the call and hoping his family in Nigeria will be awake to FaceTime once he gets it, Wanogho will be dressed in a custom-made outfit that honors his roots. Wanogho didn’t want to give away too many details because it’s going to be a surprise, but he said it will be a traditional Nigerian outfit similar to one he wore at Auburn in 2018.

From t-shirts to robes to Nigerian dress clothes, this year’s draft fashion will be all over the place, so the NFL put some basic guidelines in place that have to do with what the clothing represents. Pro Football Talk obtained the full list. The rules include:

1. “Third-party logos other than those of NFL Official Licensed Partners; Nike, Adidas, UnderArmour, and New Era.”

2. “Disparaging depictions of the NFL, or any other third-party brands.”

3. “Non-NFL sports organizations or leagues.” (So much for the XFL Defenders garb.)

6. “Obscene, pornographic (or escort services), violent (including firearms or other weapons), or sexual imagery.”

9. “References to alcohol (including beer and wine), drugs (including cannabis), and/or gambling products (including poker).”

11. “Reference to any illicit substances or activities.”

12. “Pharmaceuticals (including OTD products) including restorative and/or enhancement products.”

13. “Dietary and/or nutritional substances and products commonly referred to as ‘energy drinks.’”

14. “References to movies, video games, and other media that contains or promotes objectionable material or subject matter.”

15. “Derogatory statements regarding the NFL, its owners, employees, and/or NFL partners.”

Note to readers: if you purchase something through one of our affiliate links we may earn a commission.