Super Eagles reveal their stunning travel outfits for trip to 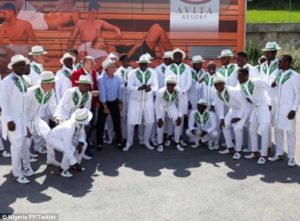 Nigerian national team have taken their World Cup style to a whole new level as they set off for Russia on Monday.

They have made a name for themselves as a team to watch at this summer’s tournament in Russia, not just for their exciting, fast-paced style of football but for their dress sense too.

First it was the announcement of their tournament kits that sent football supporters crazy. Now it is their travel attire that has got everybody talking. 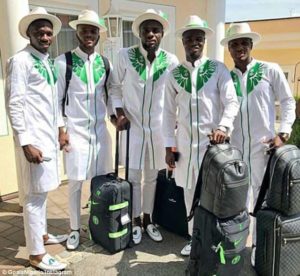 They nailed it with their kits, and have delivered the goods yet again as they boarded their plane to Russia wearing traditional Nigerian clothes, Buba and Sokoto’s.

From head to toe, the Nigerian squad have indulged in their culture and clearly have no intentions of blending in with the crowd other nations looking to upset the odds in Russia.

While sticking to tradition, however, designers of their outfits have also kept faith with the football them by placing football’s on the collars of the white and green outfits.

‘Tell the world we are coming #positivevibesonly #worldcupvibes #eue3 #supereagles @ighalojude @ogu30’ Nigerian international Elderson Echiejile – also of Monaco – wrote on Twitter as they made their way to their Essentuki training base in Southern Russia.

The exotic choice of clothing has seen them quickly become a fan-favourite before a ball has even been kicked in Russia and is shown by the response the travel outfit has received on social media.