This male beauty pageant has a national costume competition just 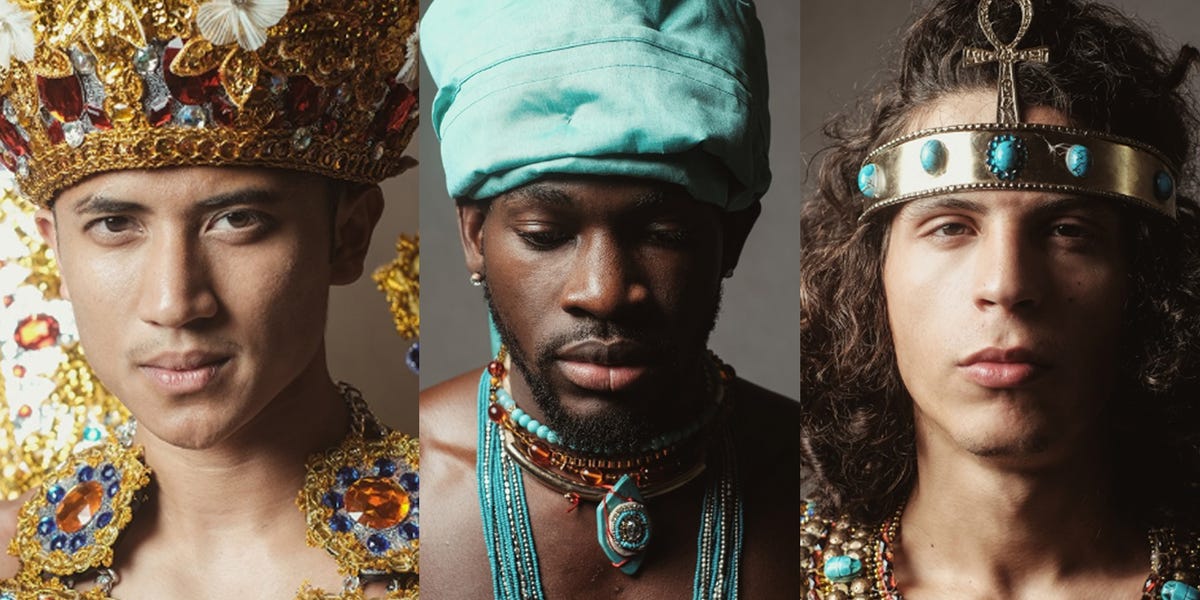 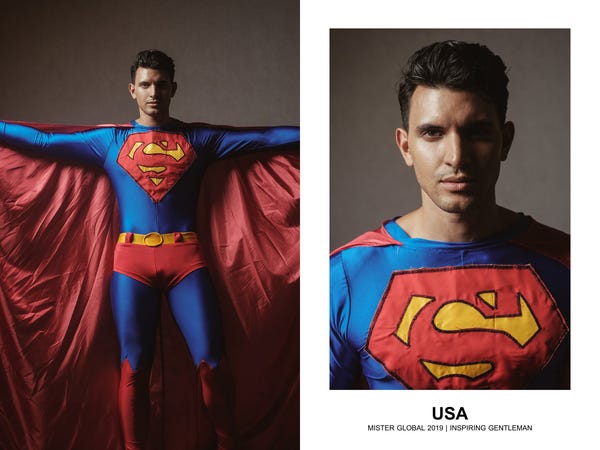 This year, the US was represented by Branden Cruz, or as he’s known on Instagram, Brandex.

Or to rock the colors of their country’s flag. 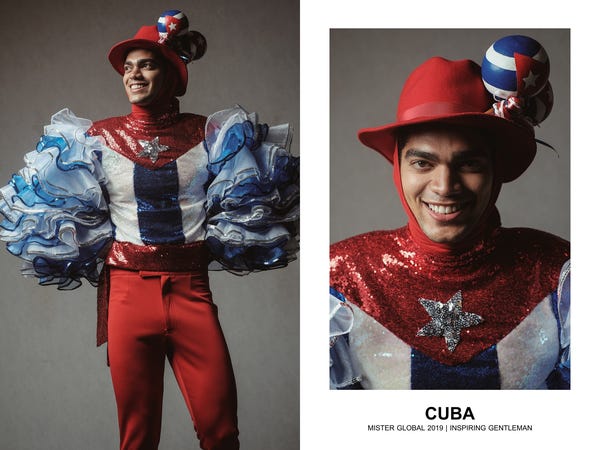 Mister Cuba 2019 is Rubert Manuel Arias Solozábal. This was the first year Cuba was represented in the pageant.

The costumes range from simple… 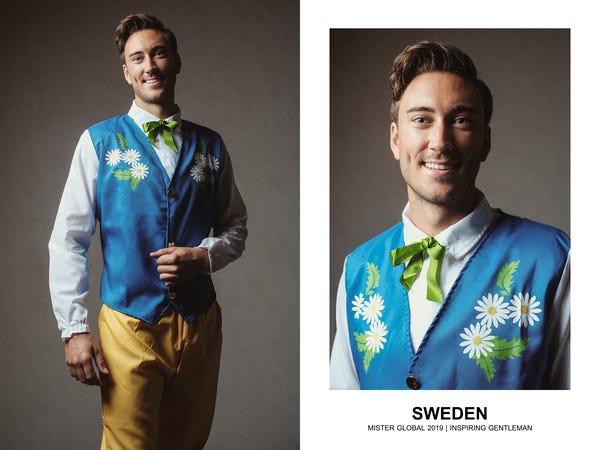 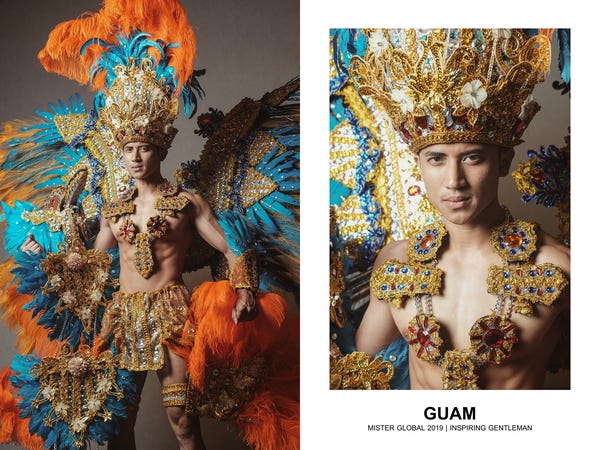 According to Facebook, Jonny Onedera’s look was inspired by the Guam kingfisher, a type of bird native to the island.

Japan’s contestant used a traditional parasol as part of his outfit. 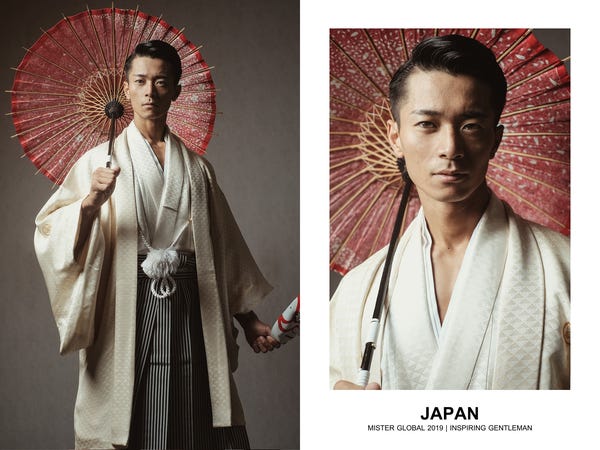 The Swiss outfit looks like the robes that professional boxers wear before a fight, but featuring the Swiss flag. 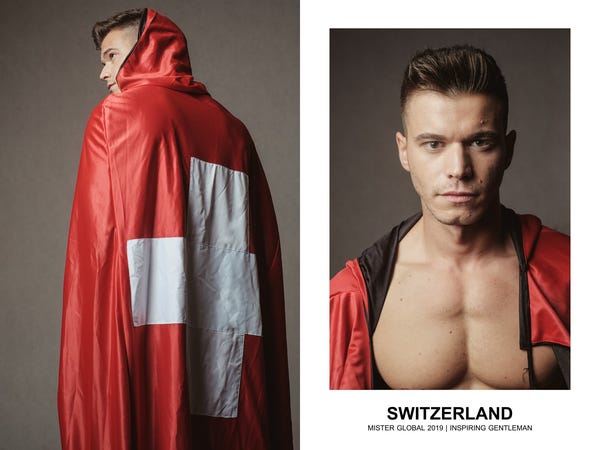 Kenan Murseli, aka Mister Switzerland, was the third runner-up at the 2019 pageant. 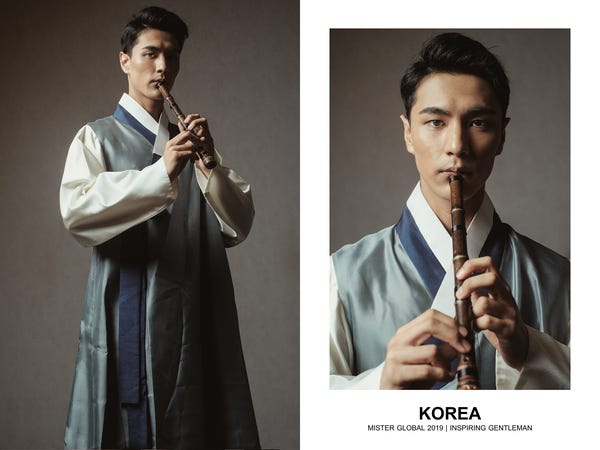 Kim is a police administration student and model, according to Missosology.

According to the pageant’s spokesperson, this year’s pageant raised money for an organization that takes care of elephants in Thailand, where Mister Global was held this year. 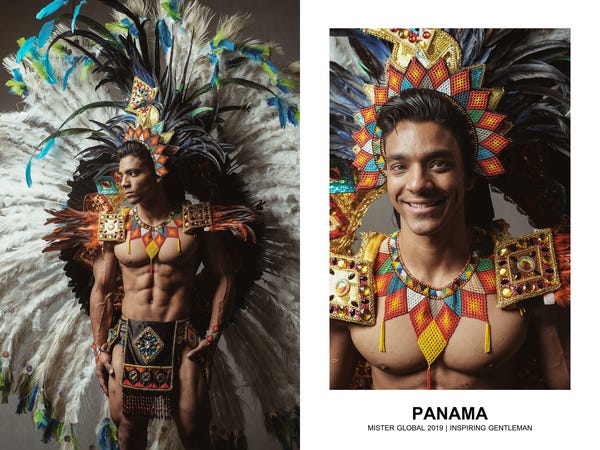 “We are true on our advocacy on Environmental Awareness and charity cause,” spokesperson Kitti Kamjunsa told Bored Panda. 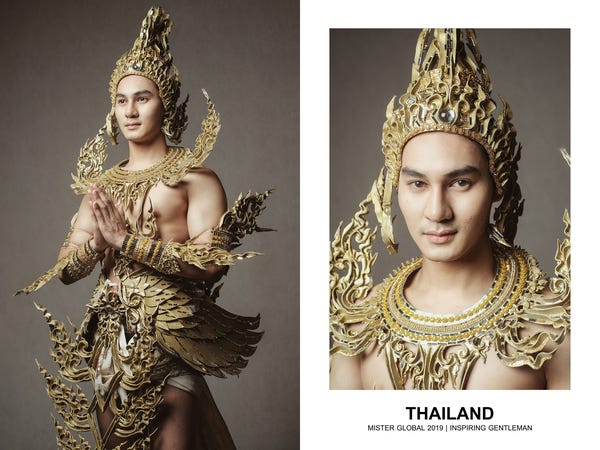 While Mister Korea won Mister Global, the winner of the costume portion was Mister Myanmar. 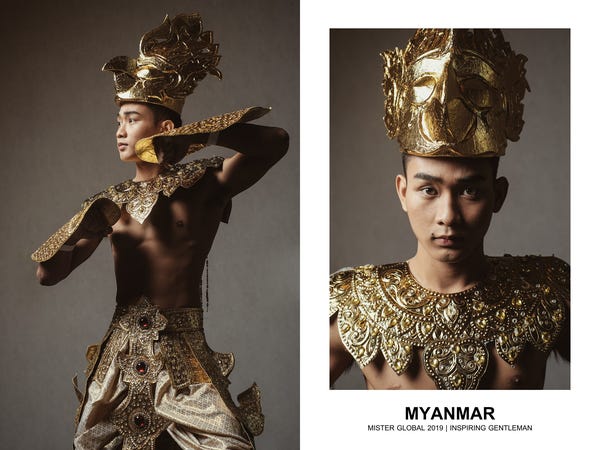 Indonesia’s dragon-inspired outfit was nothing short of eye-catching. 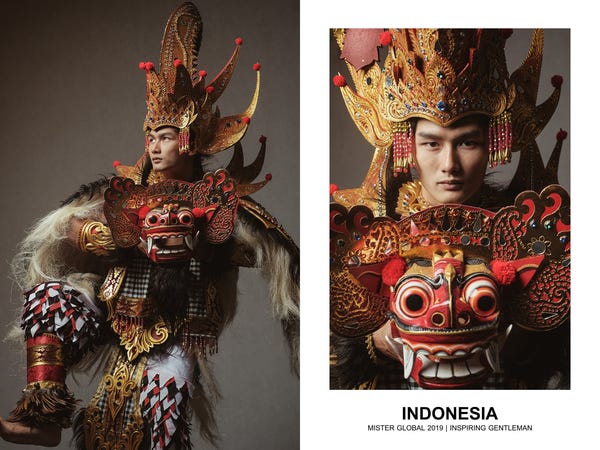 Herman Yosef was crowned Mister Global Indonesia back in April.

As was South Africa’s tribal-inspired chest-piece. 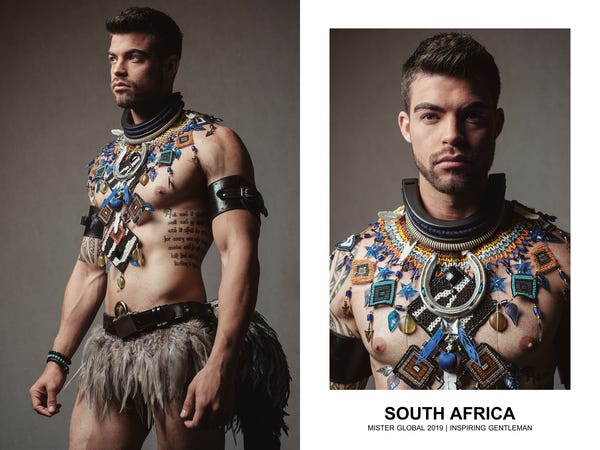 South Africa was represented this year by Marcus Max Karsten.

Unlike the Dominican Republic’s outfit — he looks ready for battle. 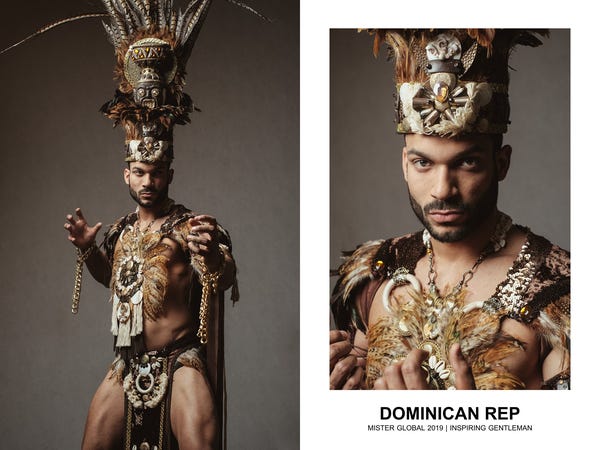 Egypt’s competitor looks like he belongs among the pharaohs of ancient Egypt. 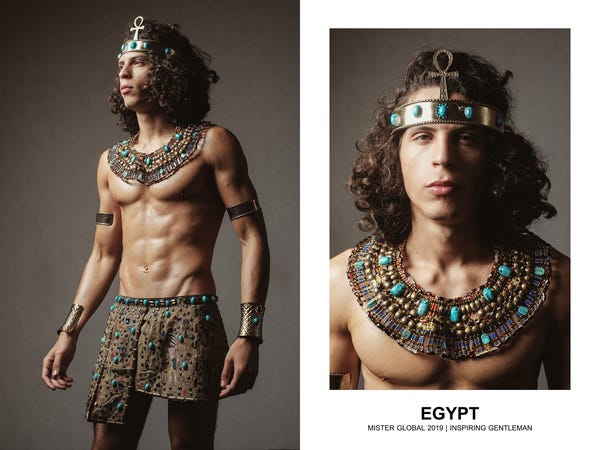 This year’s Mister Egypt, Adam Hussein, tied his look together with an ankh-adorned headpiece. The ankh is an ancient Egyptian symbol for life. 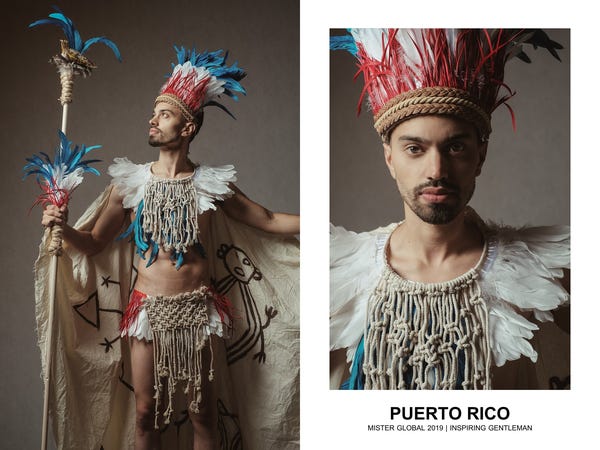 Here’s a complete list of the Grand Slam pageants.

This year’s Mister Puerto Rico was Edgar Irizarry. His costume “paid tribute to the indigenous people of Puerto Rico; the taínos,” Irizarry told Insider. “The costume I wore was designed to resemble the Cacique Taíno,” or a leader of the group.

The pageant first took place in 2014, making it a newer competition. Compare that to Miss America, which started in 1921. 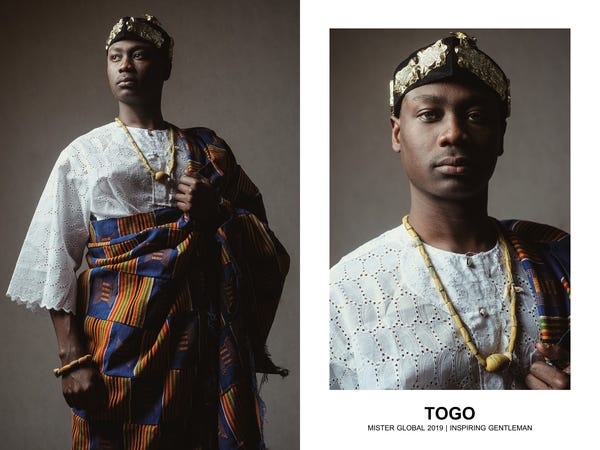 Read more: The very first Miss America contest took place in 1921 — here’s what that first pageant was like 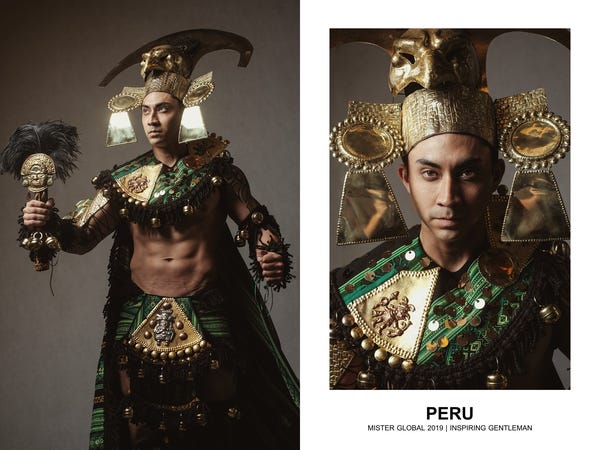 Mister Peru seems to be channeling the ancient Inca people, who lived in Peru through the late 1500s.

Though some countries take a more laid-back approach, like Tunisia. 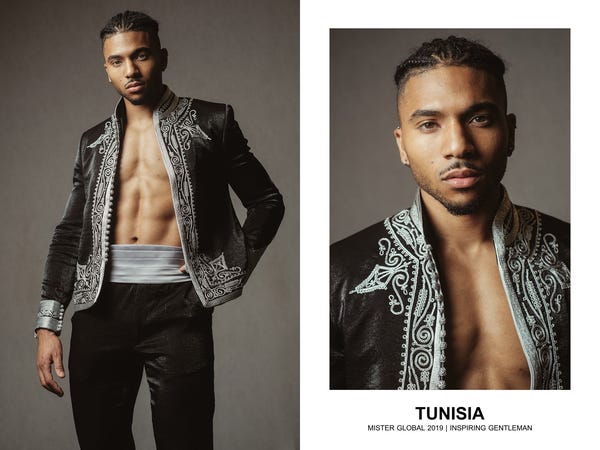 Houssem Saïdi, Mister Tunisia, was close to taking home the Mister Global title. He was the first runner-up. 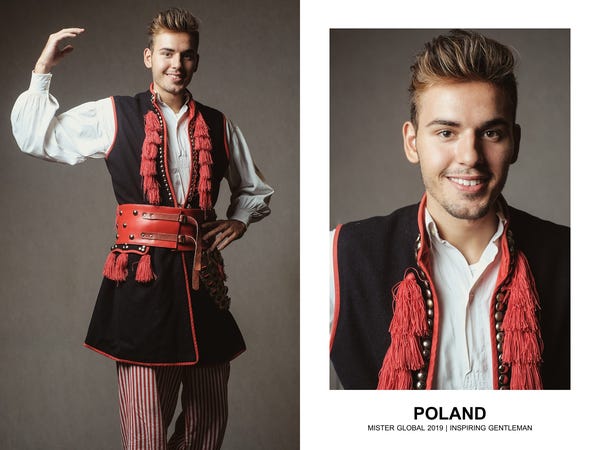