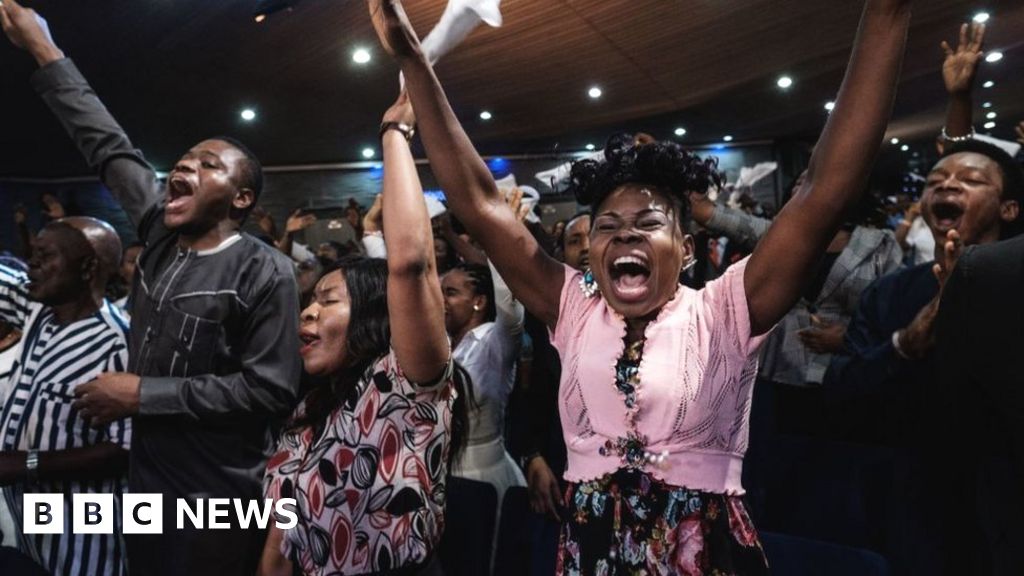 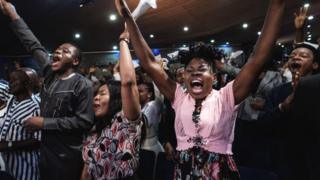 Image copyright Getty Images Image caption Pentecostal churches, which have a huge following in Nigeria, have been closed

The auditoriums of Nigeria’s mega churches are empty and their gates are shut as they are forced to observe a government ban on large gatherings to halt the spread of coronavirus.

But it took not only threats, but force and arrests for the message to get across.

In some cases those in charge of making the churches bolt their doors turned to the scriptures.

“May I use the words of [Prophet] Mordechai: ‘For such as time as this we do what is appropriate,'” said the leader of an enforcing team in the capital, Abuja, as he arrested a pastor in front of his congregation.

Dressed all in black, had he had a collar he would have passed for a preacher with his baritone voice and gesticulations.

The pastor he led out of the church, sporting a burgundy-coloured suit, shiny black shoes and with hair that glowed in the sun, looked like many of those who now lead huge congregations in the West African nation.

These preachers have changed the face of Christianity in Nigeria – with their evangelical sermons, prophecies and promises of miracles.

One of the most famous of these is TB Joshua, who last month claimed to be divinely inspired, predicting that the coronavirus pandemic would be over by 27 March, several days before a lockdown was imposed on the states of Lagos, Ogun and the capital, Abuja.

“By the end of this month, whether we like it or not, no matter the medicine they might have produced to cure whatever, it will go the way it came,” he said to applause from his congregation.

When 27 March passed the TV evangelist found himself mocked for his “false prophesy”.

But he defended himself – once again to cheers from worshippers – by saying: “What I meant was that the virus would be halted where it began, and in Wuhan it has stopped.”

Other pastors have been accused of flying in the face of the authorities and spreading fake news, impeding efforts to stop the spread of coronavirus.

The biggest controversy has been caused by Christ Embassy pastor Chris Oyakhilome, who in a video post that went viral, linked the virus to 5G networks and alleged that it was part of a plot to create a “new world order”.

Such views have been widely condemned by scientists, who say the idea of a connection between Covid-19 and 5G is “complete rubbish” and biologically impossible.

For some Christians, especially those who belong to the dwindling pews of the Anglican and Catholic churches, more needs to be done to weaken the influence of the mega pastors who exploit vulnerable people.

Image caption Many worshippers say they miss going to church, especially over the Easter period

“Those that sell us the miracle waters, the holy oils and all that, this is the time to prove it,” said Blessing Ugonna, a woman I met in Lagos.

But many of the mega churches, which run multi-million dollar business empires, have adapted to the changes brought about by the virus.

They are streaming prayer services online, and some families are trying to create an atmosphere at home by dressing up in their Sunday outfits with the head of the household even collecting “offerings” – or money – from the rest of the family to give to their church.

The churches are also making donations to the government and financially stricken worshippers in a move that is likely to see them retain popularity.

More on coronavirus in Africa:

Pastor Enoch Adeboye – the head of Redeemed Christian Church of God that has a branch in almost every street in mainly Christian cities and towns in southern Nigeria – has donated 200,000 hand gloves, 8,000 hand sanitisers, 8,000 surgical face masks to the Lagos state government..

And the Mountain of Holy Ghost Intervention Church – whose self-styled prophet Chukwuemeka Odumeje once caused a stir on social media for wrestling a congregant he claimed to be possessed by a demon – has earned some praise on Twitter for giving food to people who risk hunger during the two-week lockdown.

Nevertheless, many Christians still yearn to go to church – and last Sunday was particularly difficult for them as it was Palm Sunday.

Image copyright AFP Image caption Holy week processions, like this one pictured in 2017, have been banned

Usually, the streets of Lagos are packed on the day, with processions being held as the faithful wave palm leaves and re-enact Jesus’ arrival in Jerusalem days before his crucifixion.

The streets were empty this year – just as they are likely to be over the Easter weekend.

But I did bump into a group of four – three women and a man – returning from a small service held in someone’s home.

When I asked them why they had ignored advice to pray alone in their own homes, one of them replied: “Even the Bible said that where two or three are gathered, He is there in their midst. The Bible did not say one person.”

I then went to the headquarters of the Mountain of Fire and Miracles Ministries, known for its intense prayer sessions, in Ogun state.

The security guards told me there was no service. 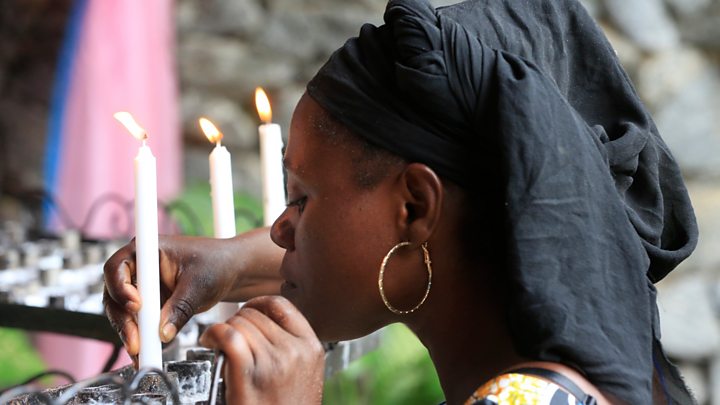 Media playback is unsupported on your device

“Not even an online service?” I asked.

“Not even online,” one of them, dressed in a lemon-coloured vest, replied.

“So how are people keeping the faith?” I inquired.

He dug into his bag and put a booklet into my hands.

“That’s what they are reading while the lockdown lasts,” he said, before walking away and shutting the gate with more force than was required.

The 60-page booklet was called Thirty Days Prayer Retreat – with recitations from the books of the Bible.

It will not be surprising if the “prayer warriors”, as the church calls some of its worshippers, complete it during the 14-day lockdown, rather than in a month.