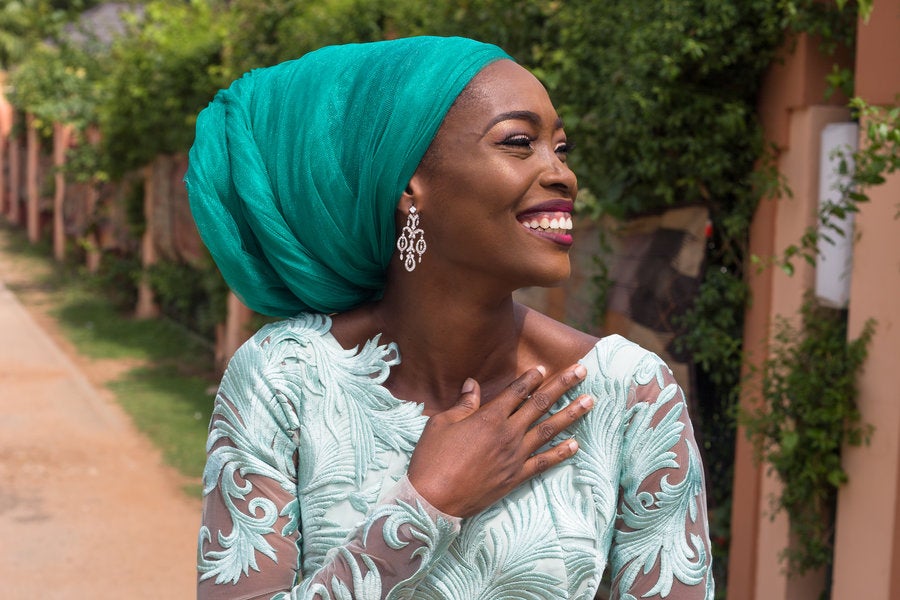 In Northern Nigeria, Eid-al-Fitr is known as Sallah, a celebratory time to give thanks to God, to commune with friends and family over food and festivities, and to remember those less fortunate 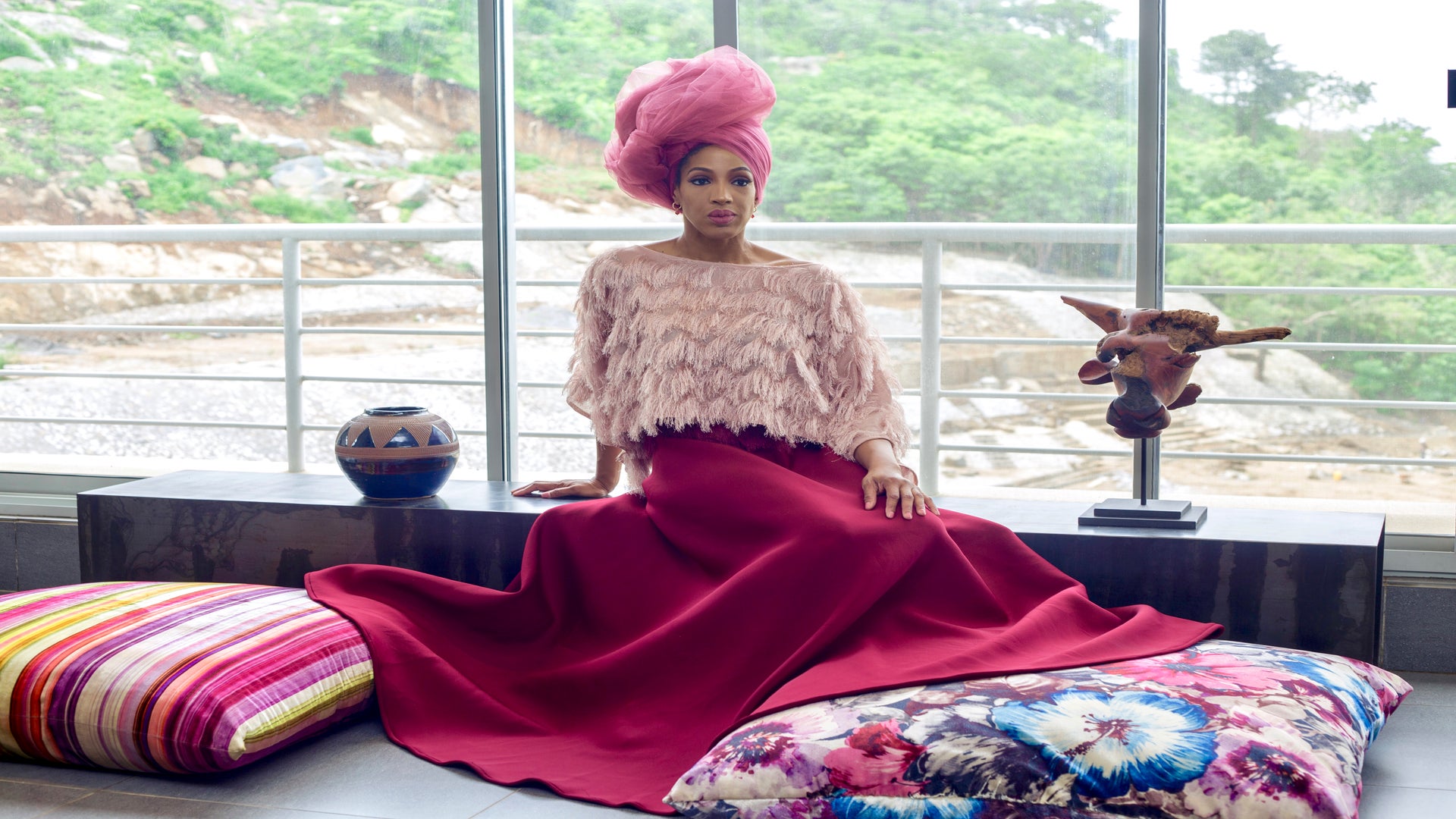 As a child growing up Catholic between Nigeria and New York, part of my memories of Christmases and Easters shuttled for family visits between continents included wearing my prettiest and often newest dresses. I remember a peach organza outfit I wore one particular Easter. It had a high turtleneck collar and puffed short sleeves. My mother accessorized the dress with short white socks that folded down once at ankle length leaving a rim of delicate white lace floating above my black patent Mary Jane shoes. I was raised to believe that celebrating the sacred moments and traditions of our lives deserved not only our best behavior but also our best clothes. As I got older and bold enough to occasionally dress down for our Christian religious holidays I never quite got over the sense that I was practicing a bit of holy disrespect. Some part of me cherished the idea that fashion had a place in the heavenly economy and that God admired a pretty new dress as much as any mere mortal.

After living in various countries with predominately Christian populations I am now in Northern Nigeria, a part of the world with the third highest population of Muslims in Africa after Morocco and Egypt. The holy month of Ramadan ended over the weekend, the 29-30 days in June when men, women and children old enough fast from pre-dawn to dusk, seek spiritual cleansing and renewal. In Islamic tradition, Ramadan commemorates the time when the archangel Gabriel gave the Prophet Mohammed the first revelations of what would later become the Qu’ran. It has been a sacred month for focusing on God’s mercy and forgiveness, and deepening one’s own practice of mercy and forgiveness to fellow human beings, from family to strangers. It was also surprisingly to most non-Muslims, one of the busiest months for local fashion designers and tailors.

Amidst the fasting, prayers and almsgiving many women spent Ramadan planning what they would wear for Eid-al-Fitr, the two-three day festival celebrated globally by Muslims that capped off Ramadan on Sunday and Monday. In Arabic, Eid-Al fitr means “Festival of Breaking the Fast.” But it is called by many names around the world, ‘The Sweet Festival,’ ‘The Sugar Feast,’ ‘The Eid of Happiness.’ In Northern Nigeria where I live and where the predominant language is Hausa, Eid-al-Fitr is known as Sallah, a celebratory time to give thanks to God, to commune with friends and family over food and festivities, and to remember those less fortunate by giving food and money. Over my last two Eid experiences in Northern Nigeria I have learned that clothes are a recognized and celebrated aspect of the Eid tradition. Muslims believe that the Holy Prophet Mohammed supported that wherever possible believers should wear their best and newest clothes to celebrate Eid and remember God. It is a beautiful notion to hold that God delights in all the aesthetics of our worship, even our clothing.

In Nigeria’s Federal Capital Territory city of Abuja located in the Northern part of the country, Muslims make up over 50% of the total population of about 600,000. Designers that cater mostly to Muslim women either created an Eid collection or scrambled to meet the bespoke orders that came in weeks before Eid. Traditionally, in this part of the world, if a woman is unmarried and still living in her father’s house, it is the father’s duty to purchase fabric for everyone in the household during the first week of Ramadan in advance of Eid preparations. If a woman is married, the duty falls on her husband to provide the Eid fabrics. Though these days older traditions break open and women can source their own bespoke or ready to wear Eid outfits.  Several local designers in Abuja are used to being swamped with Eid orders during Ramadan. Zainab Salihijo-Jiddah, of Adamawa State is the creative designer of the women’s clothing brand, Pink Fleur based in Abuja, She made close to 200 outfits this Ramadan. “I design for a wide range of women. But I will say that I do think about certain things when I’m designing clothes. I have to make dresses that serve more than one purpose. So for example, I have to think about whether a Muslim woman would be able to pray in the outfit while’s she’s out.”

Aisha Abubakar of Aisha Falke Nigeria says she dresses the modern stylish Northern Muslim woman. “I’m from Kano State further up north where Eid to me is extremely uplifting and just a beautiful celebratory time for family and Allah. Most Northern Muslim women I know are modest dressers but we love standing out. With over 51K followers on her fashion brand’s Instagram page, she says, “In my designs I specialize in long flowing dresses, kaftans and bubus but my clothes are for vibrant women who love colors.” Falke says the demands each Eid are mostly for varieties of lace and Ankara print fabrics, but designers are becoming more creative in their use of fabrics and design.

Amma Indimi, is one of those young Abuja designers willing to create less conventional clothes for northern Nigerian women. Originally from Maiduguri in Borno State, Indimi owns the luxury ready to wear clothing line LeRouge. Her Eid line boasts a more modern aesthetic highlighting fringes and revealing shoulders. “In terms of fashion, the Northern Nigerian woman in my imagination is a woman that dresses either directly according to what her faith accepts, or according to what her household will allow. I find this beautiful because in the midst of that, we have women creating modest fashion that is still alluring and aesthetically pleasing.” Indimi says she makes a conscious decision to try and cater to the African woman’s body and accentuate her curves. A practicing Muslim, Indimi says of her special Eid collection, “As a Muslim it is sunnah to adorn yourself, male or female, for Eid by wearing your best clothes. I wanted my Eid collection to be a bit more special than usual.”

Ramadan ended this past weekend the moment Eid began, with the first sighting of the crescent moon at the end of 9th lunar month and the beginning of the 10th in the Islamic calendar.  On Sunday, the first day of Eid, men and women rose for the early morning Fajr prayers, ate a small snack , donned their Eid best clothes and went as a family to the Eid ground or Mosque for the special Eid prayers before properly breaking their fast. As the day grew and festivities began, family and friends gathered to rejoice in the success of another completed holy month of Ramadan and to give thanks for the mercy, forgiveness and generosity of Allah. Everyone looking their heavenly best.

Enuma Okoro is a Nigerian-American writer, speaker and award-winning author of four non-fiction books. She is currently working on her first novel.

LagosMums Made in Nigeria Ready to Wear Outfits
fashion

Photos Of Nigerian Celebrities Who Attended AMVCA 2020 With Their
fashion
Made with coffee & love by ThemeBubble ©All rights reservd.