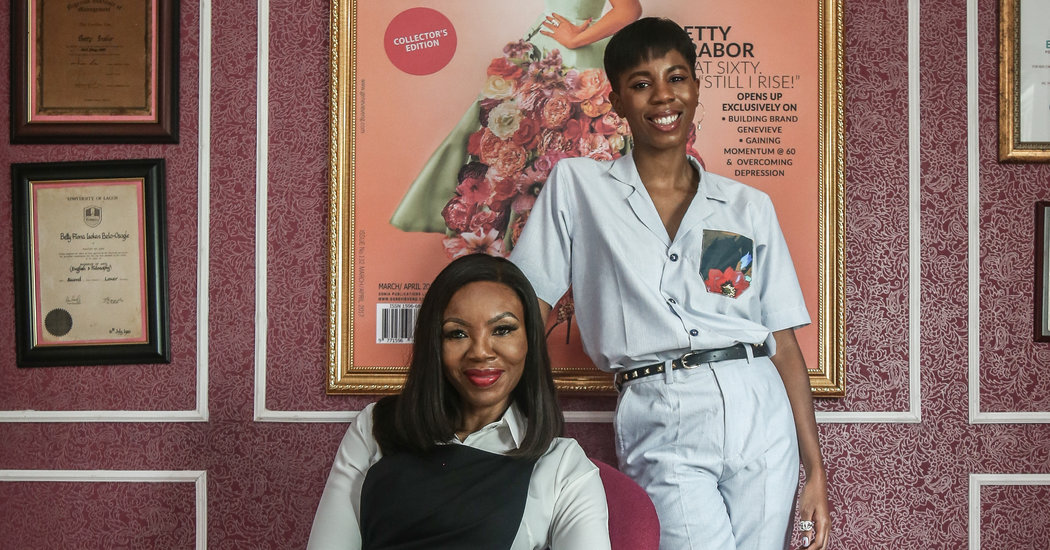 Spurred by the leadership of entrepreneurial women and Nigeria’s cultural cachet around Africa and the world, the country’s fashion magazine industry has found a receptive audience.

It’s not easy running a fashion magazine in Nigeria.

Printing presses are few, and high-quality paper stock is hard to find. In Lagos, the country’s largest city and the hub of its fashion industry, consistent electricity is an issue, with power going in and out throughout the day. And there is no formal distribution network, beyond selling the publications in a select few chain outlets or at major airports.

Many magazines rely on street vendors to sell single issues to commuters stuck in the notoriously slow Lagos traffic along thoroughfares like Obafemi Awolowo Way in the city’s Ikeja section. The transactions are clumsy: Customers quickly throw money out their car windows before traffic picks up and they move on.

Beyond all the logistical hurdles, roughly 87 million people in Nigeria — out of a population of around 200 million — live below the poverty line. But thanks to industries like oil, the country is also awash in wealth and opulence, and luxury brands are eager to establish firmer footholds there.

And it has benefited from the cultural cachet that Nigerian fashion and entertainment have built up around the globe.

Performers like Wizkid, Tiwa Savage and Davido have made Afrobeats, a musical style influenced by Caribbean, hip-hop, electronic and highlife music, popular worldwide. And Nollywood, as the Nigerian film industry is known, generates close to $700 million a year.

Nigerian designers have gained international recognition with a style sense that is inherently cultural. Amaka Osakwe’s women’s wear line Maki Oh has dressed boldface names like Michelle Obama, Lupita Nyong’o and the Nollywood star Genevieve Nnaji using adire, a distinctive hand-woven dyed cloth from southwest Nigeria. On her Instagram page, the Nigerian-born author Chimamanda Ngozi Adichie showcases photos of herself in colorful, eye-grabbing outfits, along with the hashtag #MadeinNigeria. Another influential designer, Duro Olowu, who has dressed notable figures like Solange Knowles and Mrs. Obama, was born in Lagos and often posts inspiration from his home country on Instagram.

“In Lagos, the average girl on the street is wearing leopard print leggings, a red top and a big turban and she just doesn’t care,” said Bolaji Animashaun, founder of The Style HQ, a Lagos-based fashion and lifestyle website. “Our fashion is not soft. There’s something in us that is always fighting, and it comes through in our style.”

Here are four entrepreneurial women, ranging in age from 28 to 61, who are leading publications both new and old to capture this cultural milieu. In doing so, they are serving a wide audience throughout the African continent and within diasporic enclaves in the United States and Britain and telling the story of Nigeria to the world.

“The Guardian, Punch, Vanguard,” Mrs. Irabor said, referring to the publications that drew ad dollars. “It was very business- and hard news-focused, and very little money was dedicated to lifestyle and fashion pages.”

And so, as a member of Lagos’s elite — Mrs. Irabor, 61, has been married to the media personality Soni Irabor for 35 years — she leveraged her personal contacts with advertisers to secure funding. Even those who agreed thought Genevieve would be short-lived. “Magazines here come and go every day,” she said.

Fifteen years later, the publication is one of Nigeria’s leading women’s magazines and has a staff of 14 working from its headquarters in Lagos’s Lekki neighborhood. It publishes 10 issues a year, retailing for 1,000 naira, or about $2.80. The covers are glitzy and celebrity-driven: Its July/August edition featured the Nigerian actress Adesua Etomi, who starred in the Nollywood hit “The Wedding Party,” and the film veteran Joke Silva graced September’s cover. As publisher, Mrs. Irabor has become a celebrity of sorts herself; she was recently part of a Lancôme ad campaign.

The magazine has placed an emphasis on its digital operations, the better to serve an increasingly younger audience that wants round-the-clock coverage of celebrity news. And it is a family affair. Mrs. Irabor’s daughter, Sonia, 28, is an editor at the magazine, helping her mother stay abreast of what topics will appeal to young, cosmopolitan Nigerian professionals. Sonia’s confirmation name is also what gave the publication its title.

Mrs. Irabor is still pushing to bring attention to subjects she thinks the public is ready to read about. She has written a memoir, “Dust to Dew,” that chronicles her yearslong struggle with depression. In it, she reflects on a “mental breakdown” that she says was brought on by long hours at work and bouts of insomnia.

“I believe it’s time to get the conversation going,” she said. “I went through this and have survived. It will be O.K.”

After a 15-year stint as a reporter for Nigeria’s largest television network, NTA, Adesuwa Onyenokwe was tired of reporting stories that had no women in them. So she created a program for Nigerian public television called “Today’s Woman With Adesuwa.”

But, for a working mother of seven, producing the show soon became a challenge, too.

Her latest endeavor is Today’s Woman, a lifestyle and news magazine that publishes 10 times a year. Today’s Woman has also developed an app that costs 500 naira a month, or about $1.40. The app allows the magazine’s online audience of 200,000-plus readers to share content with one another.

Instead of featuring celebrities, its covers usually highlight topics many in Nigeria still consider taboo; articles like “Drug Abuse Is Closer Than You Think” and “Say No to Domestic Violence.”

“No one was really addressing these problems,” she said. “Beyond the fashion, we’re insistent on addressing things that should matter.”

Ms. Onyenokwe remains committed to the magazine, but her plans for living a more relaxed lifestyle seem laughable now.

“My kids all say that I work harder than I’ve ever worked before,” she said. “But I believe in the importance of shining a light on important issues and just telling the story.”

Chioma Onwutalobi got her start as a gossip blogger, finding time to write even as she was earning a law degree at the University of Hertfordshire in Britain. After graduating, she started Glam Africa in 2015.

“I come from a very entrepreneurial family, so making something out of nothing was never a foreign concept to me,” she said.

Her quarterly magazine, focused on celebrity and lifestyle news, now has a circulation of 1.4 million, making it one of the most-read periodicals among women in Africa. It has offices in Nigeria, Ghana, South Africa and Britain, with plans to expand to the United States.

It also places a premium on fostering a sense of intimacy with its audience. It hosts an annual Glam Africa gala, as well as smaller events throughout the year — usually brunches and tea parties — that often attract professionals with disposable income like doctors, lawyers and entrepreneurs. They are sponsored by European beauty brands like Schwarzkopf Got2b.

Recently, the magazine began a “Beyond Beauty” campaign featuring Britain-based social media influencers and bloggers sharing their experiences with self-acceptance and self-worth. At one event in London, a panel of women discussed their experiences with conditions like alopecia, in which a person loses her body hair, and vitiligo, in which the skin loses pigment, causing discolored patches. One panelist shared her struggles with discrimination based on skin tone, and another with the visible injuries she experienced from a burn accident.

Ms. Onwutalobi, 28, leads the magazine from its headquarters in the fashionable Shoreditch neighborhood in London, where she has lived since leaving Nigeria at 17. Every other month or so, Ms. Onwutalobi travels to the magazine’s offices in Africa to meet with potential advertisers, scout for writers and broker partnerships with local vendors. The majority of her staff is younger than 30, but when Ms. Onwutalobi has meetings with people outside the magazine, she is often the youngest executive in attendance.

“Being a woman, a young woman, it’s hard for people to listen to you,” she said. “Hands down, the hardest thing is getting men to listen to me. Sometimes, I have to spend an hour getting the men in the room to see me as an equal. It’s frustrating.”

She added: “This shouldn’t be an issue anymore. If African women are to be empowered, we’re going to need men to do their part.”

As founder and editor in chief of Exquisite Magazine, a lifestyle publication based in Lagos, Tewa Onasanya said she wanted to reveal the richness of homegrown African culture.

Ms. Onasanya, 40, a British-Nigerian, started the magazine in 2003 when, she said, the rest of the world looked to African diasporic enclaves in the United States and in Britain for inspiration. Now, people are able to find fashion inspiration directly from the continent, she said. She mentioned how gratifying it was to see Wizkid — best known to American audiences for his appearance in the Drake song “One Dance” — walking in a recent Dolce & Gabbana show and to hear how the sounds she grew up with are now considered mainstream.

“Nowadays, you hear Afrobeats in the clubs and you say to yourself, ‘Yes, we’re here,’” she said.

“Before, our culture existed in pockets abroad — in the U.K., in the United States,” she added. “But now everyone is starting to look to our talents here at home. Africa is having a moment.”

Exquisite covers fashion and celebrity news for an audience of primarily middle-income and affluent women in Nigeria. Its quarterly print publication has a circulation of about 10,000, but its website has 152,000 subscribers and gets about a million visits each week. It is also distributed through an email newsletter and the message platform WhatsApp, which is used widely in Africa.

When the supermodel Naomi Campbell arrived in Nigeria this year and expressed a desire to see Vogue magazine begin an African edition, Ms. Onasanya — like many others in the Nigerian fashion community — disagreed.

“I am a Vogue fan,” she said. “But starting a Vogue Africa seems a bit unnecessary, almost like reinventing the wheel. We have Lagos Fashion Week now; we have a thriving community of local designers and models, all with their ears to the street, so we’re not lacking in content.”

The magazine has a team of 11 and now has its own awards event: ELOY — Exquisite Ladies of the Year, which honors African women. It also holds two fund-raising walks to raise awareness for cervical cancer, a disease that kills one women every hour in Nigeria.

“Finally, people — ourselves included — are realizing our value and how important showing Africa’s talents to the world is,” she said. “I can’t wait to see what’s next.”